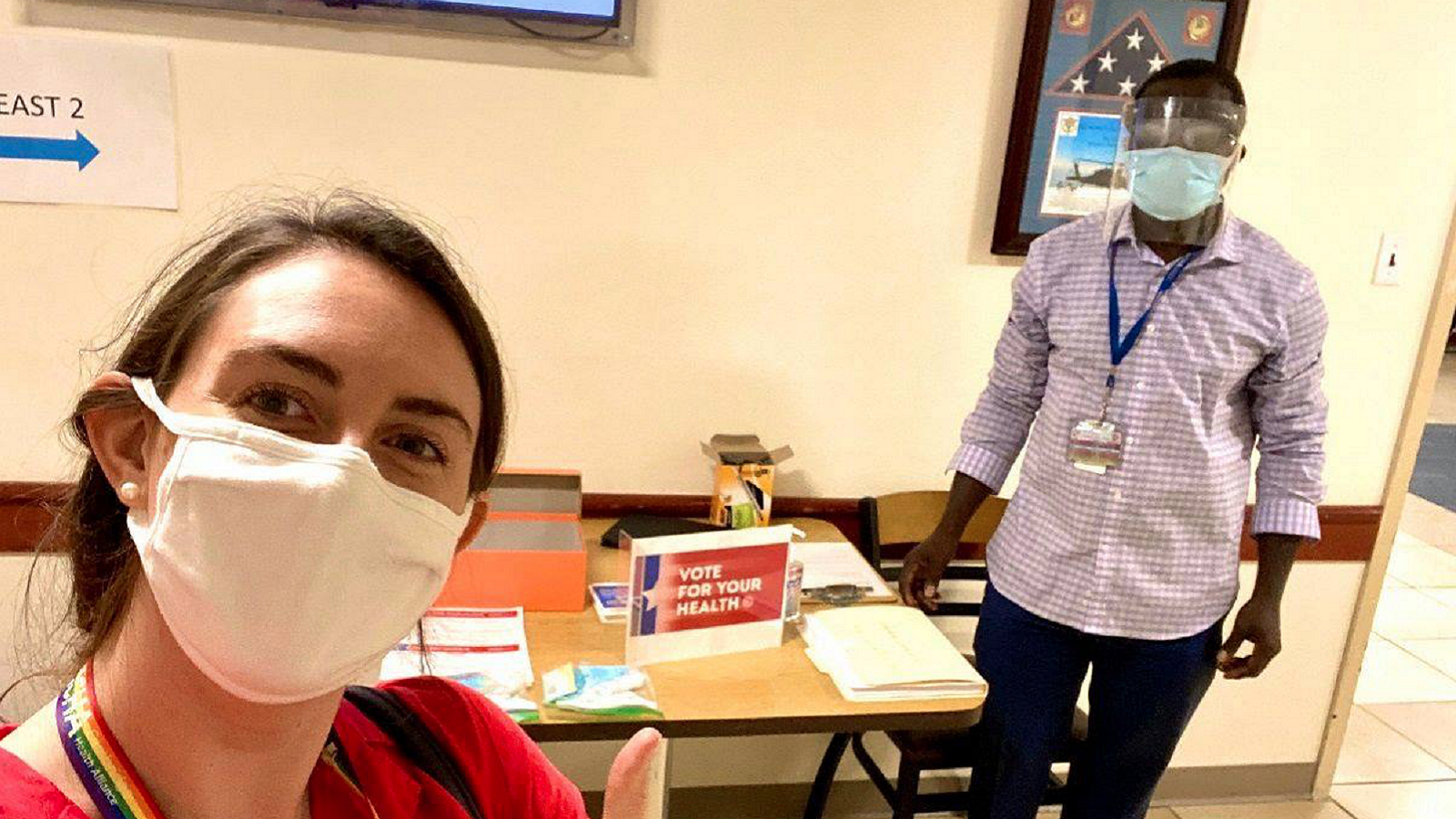 It’s a warm September day. I neatly arrange my voter registration materials at a small table outside of the Somerville Urgent Care entrance. Sitting on a cool granite bench, I watch as a young girl and her mother approach. They are linked arm-in-arm, speaking Portuguese. “Hello! Are you registered to vote?!”  They can’t see it, but I’m smiling behind my mask.

The young girl’s face lights up, and, like many who visited my table before her, she begins to share her story. In just five days, she’ll turn 18. She’s finally old enough to vote in her first election. Her mother immigrated to the U.S. from Brazil decades ago and is still waiting for her citizenship—she has never had the opportunity to vote in the country that she has called home for nearly 30 years. As her daughter signs and dates the registration form, she looks on with pride. The young girl puts the pen down with authority as her gaze meets mine:

Vote for Your Health

As a non-profit, safety-net hospital, Cambridge Health Alliance (CHA) is uniquely positioned to help individuals overcome barriers to voting. CHA serves historically marginalized and underrepresented groups, many of whom are immigrants, people of color, and low-income. All these populations experience barriers to voting, many of which are exacerbated by COVID-19. CHA’s work extends beyond patient care, working to address social determinants of health, including equitable civic participation. This fall, CHA’s Social Justice Coalition and Community Health Improvement Department led the Vote for Your Health initiative—a nonpartisan, voter registration and mobilization effort. 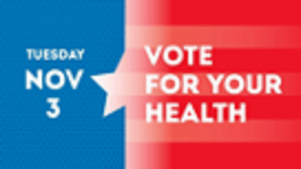 Increasing voter participation can improve individual and community health. It is linked to an increased sense of purpose as well as better psychological, physical and behavioral health and well-being.

On a systemic level, equitable voter participation supports the creation of governments that are more reflective of the communities they serve. Low civic engagement often results in elected officials who don’t understand the needs of historically marginalized populations. However, when equitable voter participation is prioritized, it is linked to more inclusive policy. This can lead to addressing social determinants of health while reducing costly and preventable health disparities. For example, the enfranchisement of Black voters is correlated with reduction in the Black-white education gap. Additionally, when women gained the right to vote, it resulted in increased government spending on children and a reduction in child mortality. When people are involved in the voting process, policy is more likely to reflect their needs and interests.

CHA chose to focus on voter registration, one of the most influential factors of voter participation. People of color, young people, low-income Americans, the uninsured, and individuals with disabilities are most likely to be unregistered and face disproportionate barriers to voting. Additionally, the registration process can pose a barrier to many people. Despite Massachusetts being 1 of 40 states with an online voter registration system, registrants must have a current signature on file with the state’s Registry of Motor Vehicles. This is challenging for many, especially those with limited technological skills, constrained access to technology, English as a second language, and inability to allocate the resources and time required to register.

In an effort to address some of these barriers, CHA’s voter registration tables were established. The collaborative effort included various CHA departments from facilities and marketing to infection control and nursing administration. Community Health Improvement organized four safe, in-person tabling sites at the CHA Somerville Campus, Cambridge Hospital, Everett Hospital, and Malden Family Medicine Center. In six weeks, tabling staff engaged over 2,000 people in voting discussions. Of this group, 200 people registered to vote both online and via paper registration—a third of whom were CHA staff.

Conversations at the voter registration tables, much like the one I had with the young woman highlighted above, involved warm welcomes and exchanges. We worked to identify and reduce barriers to voting, answered questions about voting by mail, and distributed information regarding the link between civic engagement and health.

Another focus of our efforts is voter mobilization, or encouraging people to vote. This is linked to more inclusive policy, such as efforts to reduce income inequality. We developed nonpartisan Vote for Your Health flyers and messaging, including how to register and where to vote—by mail, in-person early voting, and in-person on election day. Communications were translated into the four main languages spoken by our patients and staff (Portuguese, Spanish, Haitian Creole, and English).

In an effort to make this information easily accessible to the communities we serve, Vote for Your Health flyers were included in the September and October Revere Mobile Market fresh produce bags, reaching over 500 households each month. Patients were emailed voting information in three of CHA’s Monthly Patient Newsletters, reaching over 73,000 people. 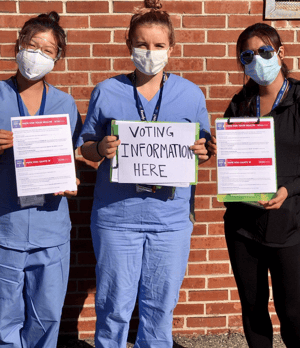 As the COVID-19 response continues to evolve, CHA hopes that conversations around voter registration and civic participation will increase voter turnout and improve the health of our communities. This initiative has given staff, providers, and patients the opportunity to not only discuss voter registration and plans, but to connect and listen to one another. The young girl’s story above is just one of hundreds that our team had the privilege of hearing.

In a time where social isolation and loneliness are touching so many of us, numerous people we engaged with just wanted to talk. Whether it was about voting or politics, the drought, their families, or what brought them to CHA that day, our tables cultivated the sense of community and connection that we’re all yearning for. Through these connections, Vote for Your Health brings our team hope. Despite the unpredictable challenges COVID-19 has placed upon all of us, we still have our voices and we still have each other. 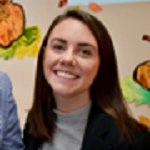 Katie Teague, MSW, is the Manager for the Cambridge Health Alliance Health Education and Access programs. She focuses on culturally sensitive community outreach and education to increase individual and community access to care and local resources. With the goal to build community capacity and improve community health, her work is made possible through the employment and training of Community Health Workers.

CHA Editor: Alexis Ladd, MPH, is part of the Cambridge Health Alliance (CHA) Marketing team. She is a member of the CHA Social Justice Coalition and supports many areas of the organization, including Community Health Improvement.

My Patient Anna, and Millions of Others Like Her, Are on the Ballot in November Here’s Why the US is Failing to Thrive