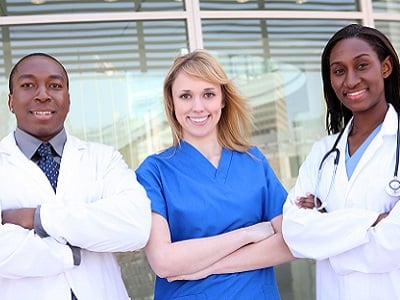 Effective models of trust: How can you incorporate the all-important ingredient of trust within your healthcare team?

Once upon a time, it was possible for a doctor to hold most of what she needed to know to practice medicine within her own brain. This was long before Google and before medicine was carved up into specialties and sub-specialties. The advances brought on by the information age and technology mean that no individual can know all there is to know anymore. And this isn’t just in medicine. It has happened in most other industries. In fact, in the 1990s, teams became the new corporate structure to deal with complexity. And, today in healthcare, we need teams to deliver care and solve complex health problems.

Now when I say complex, I don’t necessarily mean hard. Let me explain what I mean.

Not long ago, I had an endocrinologist explain that she wanted to convince primary care physicians to keep non-compliant diabetics in primary care. In terms of influencing patients who are not compliant with medication, her training and the training of a primary care doctor is the same. The endocrinologist wants to see the diabetics who have failed three different types of insulin. That is the type of problem she is trained to solve.

Specialists are great for simple problems that are hard.

That’s a problem that doesn’t need a specialist. It needs a team. A team that patients trust. A team that trusts its processes. Most importantly, a team that trusts each other. There is no team- whether it is a sports team or a healthcare team- that will thrive when trust is scarce. Scarcity of trust will kill a team. However, successful trust-abundant teams are possible. Most of my research has focused on exemplar primary care organisations, and as part of that research I’ve had the ability to observe and interview many bright spot teams. On these teams, trust is actively grown in as many ways as possible; and here is what I’ve learned:

All of the organizations I've studied were highly patient-centred, emphasising individual patient preferences and ensuring patient values guided clinical decisions. Sites articulated sincere deference to the patient and their articulated needs, which often translated to patients defining their own goals, often in personal, or social terms as opposed to disease-centric terminology. Most organisations were also aggressive in actively soliciting, responding to, and incorporating patient feedback in order to keep their practice patient-centred; one site collected patient feedback using eight different methods (eg iPad surveys in the clinic, email, customer service phone numbers).

Make the physician a team leader, when possible/practical

It is possible to break away from a trust-scarce model where the doctors supervise every aspect of a patient’s care. Building more trust in teams involves changing the doctor’s role from commander to team leader, and giving the doctor the skills to lead (which are generally not taught in medical school). One organisation spends six months “untraining” each physician they hire, which means changing the hierarchical mindset physicians typically learn in medical school and residency. This site teaches physicians to rely on each team member’s expertise, effectively sharing the ownership for patient care amongst the team, so that the physician has time to lead the team and manage the most complex patients.

Not all trusting teams must be physician led

While it is great to make physicians team leaders, not all healthcare teams must be led by physicians. One organisation cared for the most complicated and complex patients within their catchment area, and operated without a physician as part of their team structure. The multi-disciplinary care teams were led by social workers and staffed by health coaches, community health workers and licensed practical nurses. The only physician within this organisation was the CEO who fully trusted his teams’ ability to effectively care for patients.

Trust forms the basis for all the relationships within the system

A number of organisations were explicit about making trust a core value of their system; trust mattered not only between the patients and physician/healthcare team, but also between all employees. Employees used daily check-ins, team huddles, and larger meetings as opportunities to connect with others and build trust on their team or within their organisation. In a few of our bright spots, we learned that the metrics of trust looked different from most healthcare metrics. Highly functioning, trust-abundant teams meant that physicians had more time at home with their families, as they were not coming in early, staying late, or working at home. Further, most sites realised that they had to work in partnership with other specialties and partners outside the four walls of their practice, so they had to build trust (and relationships) at multiple levels within the system.

The organisations I studied had fully empowered individuals to work at the top of their license through technology and well-designed onboarding and ongoing training. At one site, customer service representatives, who typically had a high school level education, were initially trained for six months in the practice’s technology and processes. (The practice’s improvement coach also provided ongoing training and process updates on a regular basis for the entire team). The customer service representatives, when fully trained and operating at the highest level, were using the practice’s technology to queue prescription refills for provider approval. They were also triaging patients using the practice’s decision-support technology. The customer support team, as a result, was highly engaged, enthusiastic about their work and felt as if they had an integral role in caring for the practice’s patients. The physicians heavily trusted this team to take on many routine and administrative tasks which allowed them to spend more time on patient care.

The absence of fear is trust

I visited one organisation at a time that was particularly challenging. As a result, the practice held a “team morale meeting” one morning to address staff feeling overstretched. This morale meeting demonstrated that the practice had developed important organisational habits. Despite some high-stress issues, everyone was speaking equally and contributing to the conversation as well as sharing opinions and ideas. This meant that the front desk administrator and physician contributed equally to the conversation about morale, and maybe more importantly, to the list of action-based solutions the team was going to try to make improvements. In this room, the absence of fear built trust and allowed the team to move forward.

So, what will you build? What type of team would you rather join? A trust-scarce team or a trust-abundant team? Building trust in teams involves changing the doctor’s role from commander to team leader, and giving skills to lead.

This article was first published in HealthManagement.org

Erin E. Sullivan, Ph.D., is the Research and Curriculum Director at the Harvard Medical School Center for Primary Care, where she leads her team in studying high-functioning domestic and international primary care systems. She holds a faculty appointment in the Department of Global Health and Social Medicine, co-directs the Harvard Medical School Physician as Leader course. Erin is one of the leading faculty for the Center's upcoming Medical Director Leadership Institute.

The Art of the Referral Where does the individual physician fit in the new medicine?