Evolving Concepts of Justice and Safety

Rachel stayed. She stayed to survive, and for that the criminal legal system labeled her a “frequent flyer.” When she called 911, she was lucky if she got a couple hours reprieve from her long-time partner’s life-threatening abuse before he returned home. He would often return home bragging about the arresting officer making a pit stop for him at a nearby ATM to make his bond—a common practice to swiftly book and release domestic violence offenders from the county jail.

When she called for help, she was often drunk, scared, and angry, which resulted in her being subjected to coercive police interviews that included threats to have her kids taken away. Calling 911 was a game of roulette leaving Rachel to wonder which of them would be arrested that time or if the responding officer would not discern the predominant aggressor and just arrest them both, which was a police department practice for the “frequent flyers” after all. Rachel did not care. She was okay with the risk of being criminally charged because she would at least be alive in jail for the night.

Years earlier, when she sought safety for herself and accountability for her partner through the criminal legal system, including asking for mental health and substance use treatment for her partner, she felt disempowered, blamed, and alienated. Her life was not convenient for a prosecutor. She had to turn herself into the perfect, deserving victim, which meant not telling anyone about the times she was drunk, fought back, or consented to sex with her partner who had previously raped her. She stopped calling anyone for help, including her family.

She never reported the broken arm, and she stopped getting medical care for the strangulations, sexual assaults, and other injuries. She was petrified to go to the hospital because any substances that showed up in her blood would result in law enforcement being called to her bedside. Like so many survivors, she distrusted hospitals because of prior experiences of feeling blamed and not believed. She knew the records resulting from seeking medical care would only worsen her safety and risk her low-income housing.

When Rachel finally saw a way out of the abusive relationship and tried to leave, she ended up being charged with first degree intentional homicide for an act of desperation and self-defense. Local law enforcement told Rachel’s advocates sitting on her side of the judicial bench to “not rock the boat” and that standing by Rachel would only result in advocacy losing law enforcement’s support.

Devoted to the criminal legal system: privilege and ignorance required

Despite seeing survivors criminalized and harmed by the system intended to protect them over and over again, particularly low-income survivors and Black, Indigenous, and People of Color (BIPOC) survivors, I believed in the system. I was, however, cynical about the laws actually protecting survivors effectively. I understood the flaws and gaps that existed.

I knew that nearly half of domestic violence survivors and two-thirds of sexual violence survivors do not call the police, and of those that do, about 75% conclude that police involvement is unhelpful at best and at worst makes them less safe. This did not surprise me after hearing survivors’ experiences firsthand and regularly seeing studies analyzing years of data showing that police themselves are caught perpetrating sexual violence once every five days. I knew the high-tech, forensic rape investigations and the quick, victim-centered prosecutions showcased on Law and Order SVU were unrealistic. Yet, even with my awareness of all these problems and seeing them stack up, I still believed fairness, healing, and accountability was possible through the criminal legal system. This level of privilege and ignorance to the historical oppression of the criminal legal system is only possible if you are white.

I wanted law and order to work because, “How else can we deter violence?” In my mind, the flaws were not with the approach to justice or the core of the system, but a lack of funding and not enough training for individuals who administered justice. I thought the grant-funded reforms and collaborative procedures taught to victim service providers would put our communities on the right track to end intimate partner rape and homicide. At one point in my life, I even took the LSAT and thought when I became a lawyer, I was going to work in the system to create change with these types of reforms.

I was trained in what I now know as a carceral feminist lens which relies on increased policing, prosecution, and incarceration as the primary solution to curb violence. This predominant form of feminism isolates the anti-violence movement from other activists and “ignores the ways in which race, class, gender identity, and immigration status leave certain people more vulnerable” to criminalization. The belief the criminal legal system works for all survivors is one steeped in the privilege of whiteness.

Recognizing the power and control the system holds

For me to fully commit to the concept that the criminal legal system and the reforms I relied on created more harm than safety and healing, the system’s intrinsic harm had to reverberate out widely to impact me directly.

In fall 2020, Embrace experienced police coercion and control of community leadership by our close law enforcement colleagues who were out of sync with a world affirming Black Lives Matter. By simply putting BIPOC survivors we served first, not law enforcement, Embrace stepped out of the complicit roles the criminal legal system expected advocates and women in the anti-violence movement to play.

Then, we were punished for it. Embrace lost $25,000 of annual funding supporting direct services to victims of domestic and sexual violence for posting Black Lives Matter signs. Fourteen of our 17 local law enforcement agencies said they would no longer work with us to provide collaborative services and programming evidenced to save lives.

The system’s use of power and control to attempt to puppeteer and silence us to their benefit only harmed the domestic and sexual violence victims they say they are there to protect. On a structured and multi-county scale, law enforcement’s interests and desire to stifle a conversation on race were prioritized over survivors’ safety—particularly BIPOC survivors’ safety. This experience highlighted that mainstream advocacy is trapped in an abusive relationship with the criminal legal system. Witnessing no accountability, repercussions, or check in power for law enforcement violating victim rights laws ruptured my optimism, privilege, and ignorance.

Shifting philosophies to center the most marginalized survivors’ needs

Looking back, I realize the relationship between advocacy, law enforcement, and the criminal legal system has always felt forced and decentered survivors’ needs. I remember the officer advising us when supporting Rachel: “Don’t rock the boat.”

My philosophy on how we provide services to survivors and make our communities safer and healthier is shifting. My concept of justice is evolving. Like transformative justice activist Mariame Kaba explains, “I want my work to contribute to eradicating violence rather than just simply managing it.”

I am learning that focusing on reforming a historically and contemporarily violent and oppressive criminal legal system only creates a false sense of security and protects white supremacy and the state. It will not end gender-based violence. Survivors need all of us to rock the boat, challenge the status quo, and question who the criminal legal system was built to protect. System reforms will not bring justice and safety to the most marginalized people Embrace or any of us serve.

I am embarrassed by my knowledge gap and how I am only now hearing People of Color, who, for decades, have been saying we need to “develop responses to gender violence that do not depend on a sexist, racist, classist, and homophobic criminal justice system.” I have been a part of a non-profit industry that has excluded the demands of BIPOC and Queer People of Color who have been promoting these approaches for years. The unequal power the criminal legal system holds creates the conditions for violence.

**Feature photo obtained by standard license on Shutterstock. The painting displayed in this piece is by artist Judy Bubolz, Embrace Shelter Coordinator, entitled “Resilience Out of Oppression." Judy states the following about her artwork:

I created this artwork as a reflection of what I witnessed in working with survivors that stayed in shelter and from what I heard through our outreach coordinators. Oppression has deep roots, and we advocate however we can with the resources that we have available. This figure represents those deep roots of money and legal barriers. She, as a multi-race portrait, rises above with growing greenery even through chains and being silenced. 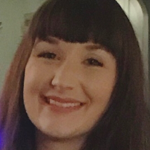 Katie Bement, BA, lives in Northwestern Wisconsin and has been the Executive Director of Embrace Services, Inc. since 2013. You can follow Embrace on Facebook and Instagram @embracewisc.