Here’s Why the US is Failing to Thrive

Not only does the United States fall short of a gold star in life expectancy, it falls below average. US life expectancy would need to improve by 2.1 years to be average among high-income countries.

US life expectancy now sits between two middle-income countries—Cuba and Albania. In 2018, US life expectancy was just 0.08 years longer than that in Albania, a country described by the US Central Intelligence Agency as one of the poorest in Europe, with high unemployment, widespread corruption, dilapidated infrastructure, powerful organized crime networks, a weak judicial system, uneven electricity supply, and a poor business environment.

This is not new. It began in the early 1980s. At that time, US life expectancy was average among high-income countries. But then US gains started falling behind our former peers. In 2010, US life expectancy plateaued. In 2014, it began to decline. Excess mortality in the US this year only makes the situation worse.

Quite simply, the US has failed to thrive. If current trends continue, the US could fall more than any other country in terms of life expectancy to 64th place in the world by 2040. Our peers would then be Algeria, Malaysia, Mexico, Oman, and Vietnam.

What happened? Look to the states.

There is no shortage of speculations in the public discourse about the life expectancy crisis. Such speculation tends to focus on the “usual suspects.” American lifestyles. Lack of universal healthcare. Racial and ethnic diversity. However, those factors do not explain the crisis. Other speculation focuses on aspects of today’s social, economic, and public health environment. But today’s environment—including political polarization and the related failure of the United States to manage the pandemic—cannot explain the emergence of the crisis 40 years ago.

US population health has failed to thrive for the same reason that children fail to thrive: an inadequate intake of vital resources. Resources such as livable wages, worker protections, access to reproductive care (including abortion), clean air and water, and accurate information about health-related risks have become harder to obtain, or remain out of reach, for many Americans. This is especially so in Midwestern and Southern states.

That last point is key. States are a big part of the story, as argued in a recent series of articles.

Since the 1980s, states’ policy contexts have changed dramatically as their life expectancies have diverged. States like Connecticut created contexts that provide vital resources for their residents through greater schooling expenditures, higher minimum wages, tax credits for working adults, higher taxes on tobacco, relatively generous Medicaid programs, and so on. States like Oklahoma created contexts that provide few such resources and even ban their cities and counties from doing so.

The great policy divergence can be traced in large part to the growing influence of corporations, their lobbyists, and wealthy donors on state policies and politics. 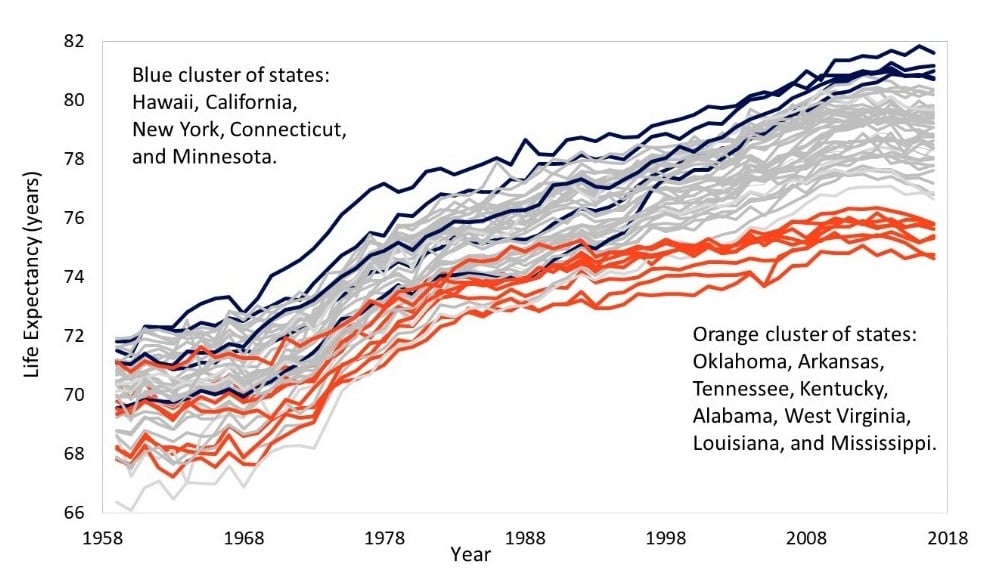 In other words, the life expectancy crisis is not so much a national crisis as it is a crisis within certain states. These states pull down the national average, as they enact policies that starve their people of vital social, economic, and public health resources. Had state policies not changed the way they did, one study estimates that the US life expectancy trend after 2010 would have been 13% steeper among men and 25% steeper among women. Instead, as many states purposefully deprived their people, Oklahomans, Arkansans, Tennesseans, Kentuckians, Alabamians, West Virginians, Louisianans, and Mississippians experienced a shallower decline (or increase) in the mortality rates that drive life expectancy.

How can the US catch up with its peers?

Major changes in US policy are required. Dead bodies are piling up in ways that show how the policy context in many states—particularly in the South and Midwest—shortens Americans’ lifespans. Altering them to prioritize people’s well-being could bring sizable improvements in health and longevity.

One study estimated that US life expectancy could improve by 3.8 years if the US implemented the average social policy generosity of other rich democracies. Not the social-democratic average. Not the Scandinavian average. The average of the group of countries that used to be our peers, including Australia, Canada, New Zealand, and the United Kingdom. If the US climbed up to this average, US life expectancy would surpass Canada and the UK.

Another study estimated that life expectancy could increase by more than two years if all US states adopted the average policy contexts of the healthiest states. That would return US life expectancy to being average among high-income countries.

That same study identified a set of state policy domains that could be particularly effective. Those include the environment, labor (e.g. minimum wage), tobacco taxes, civil rights, immigration (e.g. drivers’ licenses for undocumented persons), gun control, access to safe abortion, and marijuana. More liberal versions of the policies were associated with significantly longer life expectancy. Marijuana policy was the only exception, where a conservative version was associated with longer life expectancy.

This new wave of studies demystifies why the US has failed to thrive. On a positive note, they show what can be done to help solve the crisis and which states are already doing it. The next step is to convince policymakers and the public that US policy priorities must change. We must prioritize people’s well-being if we are to escape this crisis.

Jennifer Karas Montez, PhD, is Professor of Sociology, Gerald B. Cramer Faculty Scholar in Aging Studies, Director of the NIA-funded Center for Aging and Policy Studies, and Co-Director of the Policy, Place, and Population Health Lab at Syracuse University. Her research focuses on the social and political determinants of population health. 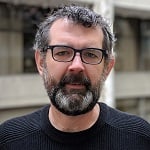 Jason Beckfield, PhD, is Professor of Sociology and Associate Director of the Harvard Center for Population and Development Studies at Harvard University. His research examines how social and political institutions shape inequalities in population health.