Arab American Research Gaps and a Survey of its Solutions

Think of the simplest pieces of health information that we know, rely upon, and understand in society. Smoking causes lung cancer, insulin resistance precedes type-2 diabetes, lead bears a detrimental impact on child health. Because of applied public health, surveillance programs, population health metrics, and increased data representation, we are not only able to articulate these relationships, but also describe their scope within different contexts.

Examining these relationships according to the social determinants of health framework affords us additional nuances, too. For instance, food insecurity has an interactive relationship with insulin resistance that impacts diabetic risk. Food insecurity experiences are modified by things such as race/ethnicity, presence of infrastructure, and built environment, which compound into health disparities with time if not addressed.

We have a great ability to describe the state of health in the United States. But, encompassing as they are, there are gaps and imperfections in the system. Imagine that most methods of data collection fail to describe you and your community’s health. Research-driven interventions are rendered decentralized, fragmented, or non-existent because of this lack of data.

The U.S. Census as an information gap for Arab Americans

For some, such as myself, this is not hard to envision. Every time I fill out the Census, or rather, most surveys that ask how I identify, I am guided to list non-Hispanic white as my race and ethnicity. For many like me, who identify as Arab, Middle Eastern/North African (MENA), or Southwest Asian/North African (SWANA), this is far from how I truly identify. As an epidemiologist, I understand that this simple guidance has drastic implications for the portrait of health for upwards of four million people in the United States.

Missing or inaccurate data on a scale of nationwide surveys such as the U.S. Census, the American Community Survey (ACS), or the National Health and Nutrition Examination Survey (NHANES) means several things, but in short, there is no central, longitudinal narrative that describes this population alike other racial/ethnic groups in the United States.

In consolidating us into the non-Hispanic white population, my community is not recognized federally as a minority. The Statistical Policy Directive No. 15 by the Office of Management and Budget defines race/ethnicity categories for federal surveys, which has trickled into many non-federal surveys, and excludes a MENA category that would disaggregate our community from the non-Hispanic white population. This directive invalidates our lived experiences, whether those are the outcomes of discrimination, health disparities, or even our achievements.

Those identifying as Arab, MENA, or SWANA are simply not counted as such, masked by the greater majority we are lumped into. One critical consequence of no federal recognition resides in funding opportunities for programming. Organizations and research groups that specialize in Arab, MENA, or SWANA matters often cannot apply to programs or funding opportunities from sources such as the National Institution on Minority Health and Health Disparities. Thus, for those who wish to do something about this lack of representation, finding the means to fund any plans can be challenging.

None of this is meant to say that there is not any hope, however. Despite the impediments before us, in the absence of central narratives, there is excellent work being done to depict our stories, analyze our life courses, and identify determinants of our health, our struggles, and our achievements. One such example is the Survey of Arab Health in America (SAHA), a national survey developed by a group out of Boston College, that intends to capture a national portrait of our community. Modifications have been made to account for the COVID-19 pandemic since its launch, and there is an open portal for those who wish to be further involved or take the survey.

Additionally, there are research groups across the country working to train early-career scholars and investigators in social science research. The Training-to-Engaged Research Group (TERG) accomplishes just that, hosting a cohort each year with the intent of practicing robust research methods, teaching grant writing skillsets, and generating investigations on and for the groups that attendees serve or identify with. The scope of this program extends well beyond the United States, encouraging cohorts to conduct interdisciplinary work across diverse regions and geographies.

Oftentimes, research, be it medical, public health, humanities, social science, sits in a silo after it is published. It often stays in a journal, communicated between scholars and discourses, but rarely gets to the communities it applies to. The Center for Arab Narrative’s mission is to ensure that research scales beyond academic walls, communicating new and contemporary research concerning Arab, MENA, and SWANA populations in a visually appealing manner using plain language. We also coordinate partnerships between ACCESS and research groups and consult with scholars at all career levels on their methodologies. In doing so, we hope to advance our stories and describe our state of health as they come.

We are a young program, with highly motivated and interdisciplinary staff. In the future, we aim to take our mission to federal offices, joining the many groups advocating for the inclusion of a MENA category on all federal surveys. In the absence of representation on the federal level, I trust that the Center for Arab Narratives, Training-to-Engaged Research Group, the Survey of Arab Health in America group, and so many other programs, scholars, and community-driven initiatives, continue to bridge that gap, fortifying the next Arab, MENA, and SWANA generation with the tools and encouragement to share and document our life experiences. 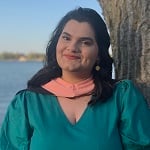 Kaitlyn Akel, MPH, is an epidemiologist and research specialist with the Center for Arab Narratives (CAN) at Arab Community Center for Economic and Social Services (ACCESS) in Dearborn, Michigan. Visit CAN on Twitter, Instagram, or Facebook to learn more. To contact CAN, email research@accesscommunity.org.