A Teaching Hospital Partnership with the Rosebud Sioux Tribe

Beautiful Rosebud, South Dakota, is the home of the Rosebud Sioux Tribe, or the Sicangu Oyate. In 2012, the Sicangu Oyate was one of the first communities to ask teaching hospitals to send physicians to work in the local Indian Health Service (IHS) facility, nearly 70 years after physicians from teaching hospitals started working with the Veterans Health Administration. The IHS is the U.S. agency that provides care to 2.6 million American Indians and Alaska Natives.

Damon Leader Charge, previously the Rosebud Sioux Tribe’s Health Administrator, now works at the University of South Dakota Sanford School of Medicine. For many years, he has helped educate health professionals on the history and values of the community.

I have the privilege to be one of the physicians that Damon has educated. “What do you think are some of the first things a new teaching hospital doctor needs to know before they work in Rosebud?” I recently asked Damon, catching up with him just as he was wrapping up a new home purchase. Damon says:

Ultimately, it is an opportunity to affect the quality of health care on so many levels, and in the end, is a win-win-win for all involved. First, trainees and providers are able to strengthen their CVs. Secondly, we are bridging gaps between tribal members and non-tribal members. And third, we are increasing the quality of health care for the Sicangu Oyate. The benefits of this partnership have been impactful and beneficial for all involved, very encouraging, giving hope and gaining the trust of tribal members, which has been a long time coming.

To work in the Indian Health System, it is important to understand the treaties that the Sicangu Oyate signed with the U.S. government. The treaties are living documents. In fact, the federal government was found in court to have failed its treaty responsibilities to provide health care to the Sicangu Oyate just last year, related to an incident in 2015. And this is unfortunately only one of many failures and injustices the Sicangu Oyate have faced since signing the 1868 Treaty of Fort Laramie. One scholar, Dr. Donald Warne, has described that treaty, which exchanged land and resources for health care and social services, as part of the nation’s largest prepaid health plan. Damon states:

It is critical to understand this perspective. So often stereotypical information takes precedence to the fact of the matter that we gave up millions and millions of acres of land, mineral rights, water rights, and timber rights for what was promised to our tribes in perpetuity via the Fort Laramie Treaty of 1851 and 1868. So in reality, we prepaid for our health care, education, housing, etc. That said, we are only funded at 50-60%, at best, across the board, truly disheartening. In the end, we continue to live in a strength-based and resilient manner, like our ancestors have taught us.

Having physicians work in Rosebud through partnerships with teaching hospitals offers advantages and disadvantages. I frequently check in with Damon and other community members to learn how perspectives are evolving over time.

Damon shares, “One of the disadvantages of the current system is that doctors are coming through for two-to-four weeks at a time. It would be great to also start residency programs to fill in the gaps with local, permanent doctors.”

I thanked Damon from the heart and wished him the best with the final arrangements for his family’s new home. He is owed an immense debt from all of us among the health care team in Rosebud, which we aim to repay each day through our work.

Disclaimer: The opinions expressed in this article are the authors’ own and do not reflect the views of the Indian Health Service, the U.S. Department of Health and Human Services, or the United States government.

**Feature photo provided and used with permission from Rebekah Rollston, physician within the MGH/Rosebud partnership.

Matthew Tobey, MD, MPH, is an Internal Medicine Physician and the Founder and Director of the Rural Medicine Program at Massachusetts General Hospital (MGH). He works in primary and hospital care at the Rosebud Service Unit of the Indian Health Service, he founded the MGH Fellowship Program in Rural Health Leadership, and he directs MGH’s partnerships with the Indian Health Service and the Rosebud Sioux Tribe. 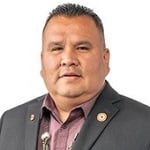 The Various Faces of Trauma No Borders for Those Who Fight